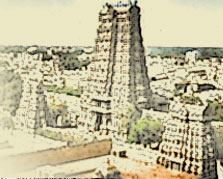 A few months ago I moved to Madurai with my parents, taking a sabbatical from my career in advertising. A drastic change some would think after having stayed 13 years in India’s most bustling metropolis- Mumbai. Someone called Madurai a village city and that is an appropriate description. For those of you who don’t know Madurai, it’s located about six hours away from Tamil Nadu and Bangalore by road. It is otherwise known as the Temple City being famous for the Meenakshi Temple which is the city’s landmark. So join me for a few observations on mystical Madurai and how to make your mark in marketing here.

Before I even begin to touch on the various aspects of how marketing in Madurai is different from the metros, it is critical to understand that there is quite a difference in aesthetics. I think is noticeable in any city if you keep your eyes peeled when you drive from the airport to your destination. There are tell-tale signs. The first is the hoardings. You notice that bright contrasting colours are a norm, as are thick strokes and painted drop shadows. You will find quite a few hand painted signs here still, while there are vinyl printed signs in the more populated areas.

The love for bright and somewhat garish colours is also evident if you have an opportunity to glimpse into people’s homes. Shades of bright pink or luminous green is not uncommon here, both inside or outside your home. Local painters often balk at painting light shades like cream, (a challenging task for my mother) and they do so with a lot of reluctance.

The concept of whitespace is also quite alien in some of these locally painted signs. The fact that the Tamil font is so cursive is probably a reason for this. You get the feeling though that space is a premium

So in short if you need to do something that looks local, you can’t go wrong with the simple formula of – thick borders or strokes in white or black, black drop shadows, lettering that is coloured with two colours horizontally, all on a nice garish backdrop.

But that’s not all. One interesting piece of artwork that glaringly stands out is found on the road. You may notice that some long distance buses bear some interesting visuals on its sides. I was quite amazed to see colourful and realistic paintings of movie characters like the Navi from Avataar and even Japanese Manga characters. A sign of the changing aesthetic? Perhaps, only time will tell.

Madurai has always been known for small shops on narrow bustling streets that you tackle once the searing heat abates as the sun sets. The heart of the city near the Meenakshi Temple is where you venture for anything you need. This is an area crowded with small shops and hotels. Years ago you wouldn’t quite conceive that shopping formats like retail stores or brand outlets would crop up in Madurai. Now you have a Big Bazaar, Reliance Retail and a Spencer’s outlet here apart from some local chains. While local chains try to mimic larger retail stores they do have hang-ups from their small store operations.

One example is the payment system that I noticed in a large local department store. While you have a modernised checkout counter with a person equipped with a bar code reader, the actual payment is entrusted to a common cashier. This means that you make a bill at the checkout counter and then proceed to another counter to pay the bill. The number of cashiers is less than the number of checkout counters, which naturally causes a bottleneck. This is also true in medical stores where one person finds the medicine, another person bills it, then a cashier and a person who hands over the medicine finally. Why this arrangement you ask? I would guess that it’s a matter of trust and some weird check and balance for inventory management. The result though seems to defeat the purpose of the retail format. Also eliminating the entire concept of last minute purchases at the checkout counter.

Another observation is the number of people that are manning these retails stores. In most other cities, most large retail stores are self-serving. While there are a number of shop assistants to help you if you need something, in Madurai, there seems to be markedly more people per square foot of retail space.

On the whole though, Madurai is still about individual retail outlets rather than malls. While money is being invested in the aesthetics of the retail space, more often than not the products are expected to sell themselves. Sales personnel are not very vocal about their spiel. The salient features of a product or a product range needs to be coaxed out of them. This is probably a remnant of over the counter sales mentality that comes from running a small shop. In fact sometimes they come across as being quite adamant that one should just pick up a product that they are referring too. This said that you might be surprised to find a wide variety of brands and merchandise that you may think is only available in a metro. This is thankfully due to retail penetration no doubt.

From the look of it, you can guess by now how advertising in Madurai looks different. You will see the same font and colour palette treatment. What in my opinion doesn’t work though is when you see the occasional piece of retail material or signage that has something in Hindi in it. This is a complete waste of advertising space. Probably conceived by an agency in Mumbai or Delhi for a national campaign, the message is completely lost on locals. There are very few people here who could understand Hindi, lest read it. On tv most advertising for the South Indian market is done on Sun tv and other channels that have Tamil content. At the same time there is a small group of people who consume English channels. The problem is that you notice a lot of Hindi ads being displayed on these channels, but no content that is tailored for the South Indian market. I guess the numbers don’t add up for the media planner, but it does seem to be an untapped opportunity at some level as well. It is also to see English words written in Tamil. Useless to a person who can’t read both Tamil and English. This is just as bad as English words written in Hindi. How do these trends catch on?

The winds of change are blowing though Madurai though. Madurai airport is now an international airport with direct flights to Sri Lanka and Dubai, so go figure. Madurai now has a movie multiplex – an Inox nonetheless (though tickets here are much cheaper than in any other city mind you). Another thing you may notice on the streets is that nobody seems to be wearing collarless t-shirts, or printed ones. But the retail stores seem to be overflowing with them. And then you watch a movie and notice that its catching on with the college crowd who seem to wear it like a sign of the changing times and needs.

The pinnacle of change is perhaps digital penetration. You now find e-commerce ventures that are being home brewn here. You can now supposedly order your groceries online and have them home delivered here in Madurai. The infrastructure is improving. The broadband speeds are quite good here in Madurai and compete with what you find in metros. Added to this smartphone usage is up and obviously growing. Apparent by the number of new mobile stores that you see here.

What you don’t see

Well a fitting end to this article is what you don’t see selling in Madurai and what are possible marketing opportunities. Madurai has quite a few colleges, but the café culture hasn’t caught on. You don’t see any of the common India coffee chains like Café Coffee Day or Barista here, let alone the more flamboyant ones. You don’t find any large bookshops here, the only Higginbotham is painfully derelict. While there are few fastfood outlets, the characteristic home-delivery scooters or motor bikes are apparently absent whizzing through traffic.