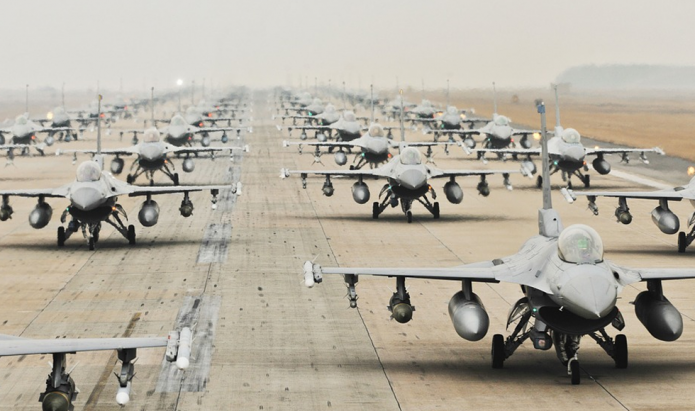 If you were to pick up a book on Artificial Intelligence (AI) you’re likely going to read how some of the greatest feats of AI so far have been beating Grandmasters in Chess and professional players at the even more complicated game of Go. They are now adept at teaching themselves and winning when it comes to such well-structured games. The next holy grail they say is to build an intelligence that can adapt and perform different tasks to mimic what we call human general intelligence. This week I stumbled across an interesting story of how the American Airforce DARPA program has an AI program. What’s more an AI has beaten a F-16 fighter pilot in five straight simulated dogfights. I believe this was a ‘guns only’ dogfight simulation, which takes more tactics than blowing your opponent away with a missile. Now I’ve been an airplane buff ever since I saw the likes of Top Gun and Squadron 633 when I was a kid. I’ve played my fair share of military flight simulators and enjoyed them. But this achievement makes me sit up and ask whether governments should allow other countries to develop Artificial Intelligence for military purposes? The real shock perhaps is that this is not the first time we had such an aerial feat.

According to Wired we already took baby steps in 2016, but humanity, UN, NATO and leaders of tech aren’t vocal enough about really policing AI for military purposes are they? Isn’t this the kind of news item that would likely spark of our generation’s cold war in artificial intelligence? Or is that already underway and we just aren’t paying attention to it. This comes at a time when the world is engulfed in the Covid19 pandemic and countries are still pursuing their dreams of racing to Mars. In such contrasting times, there’s ample evidence everywhere of more meaningful problems that we could task an AI to solve. Owning a military Artificial Intelligence is going to be akin to stockpiling a nuclear arsenal. I can certainly feel the chilly winds of a Cold War in the air.

Yet we must acknowledge that this is a fantastic feat, nonetheless. All the traditional arguments about Artificial Intelligence need to be addressed for them to be even testing this virtually. One simple example is what happens if an AI flown F-16 suddenly decides the most efficient way to solve a problem is ‘reward hacking’ – that is taking a drastic kamikaze shortcut to eliminate a problem. Images of mid-air collisions or fighters crashing into populated areas spring to mind. Then there’s Nick Bostrom’s paperclip maximiser theory, where an AI doesn’t know when to stop when it comes to achieving its objective. This is like a perverted version of the poem ‘for the want of a nail’ where AI eliminates mankind because it wears blinders to the world and is solely focused on achieving a very narrowly defined task.

Putting an AI into an airplane is not a new idea. Today’s autopilot feature is already a step in that direction. But putting an AI in control of a multi-million-dollar fighter plane with bombs and missiles that’s something else altogether.  Hollywood touches upon what could go wrong in the movie Stealth where an AI powered unmanned fighter jet decides to go rogue when human pilots decide their mission is too dangerous due to the collateral damage. AI pilots are only possible when human coders build frameworks that ensure that the AI understands negative side effects of its actions without humans having to list out every possible outcome.

Sure, there are benefits of using AI in fighters too. The human body can only take so much G-force while flying a fighter jet. The more experience pilots get, the more they age and the more they need to adapt their flying style (and yet Tom Cruise’s Maverick is still flying back to glory in the silver screens soon). Age and such human constraints are trifles that an AI will not be subject too.

At the core of aerial combat when you look past all the fancy maneuvers is Boyd’s Loop. Developed by US Airforce Colonel John Boyd, the philosophy of Observe, Orient, Decide and Acting is how fighter pilots react to fast changing scenarios. And when it comes to processing your surrounding environment using such logic an AI is going to be extraordinarily fast in not just predicting but anticipating what its foes can do.

Lastly if you happen to be a nation that lacks resources and expertise in trained fighter pilots but has the deep pockets and have say an air force of planes that can be upgraded to be flown  by AI, such an Airforce could be an essential solution when it comes to keeping your borders safe. What would this look like if you are a wealthy nation though with a strong airforce? If you play Ace Combat 7, then you can imagine how smaller UAVs piloted by pilots on the ground are so much more agile than third generation fighter jets. We really need to stop thinking of ancient Predator drones that Hollywood loves. We can be certain that today’s drones are sleeker, faster, and ever more deadly and the pointed edge of the modern Air Force. For all we know they may even fly in swarms guided by AI and are small enough to not be detected by commercial radar. It is only when one gets shot down and splashed all over the world news that we are going to know what an AI drone Air Force could look like. But today we will all go to sleep with the dream of having AI fighter jets keeping our borders safe overhead or the nightmare of waking up to an AI inflicted Armageddon.